Several organizations and columnists have concluded erroneously that the excise tax to sugar-sweetened beverages did not reduce purchases of these products in 2015 and 2016, as it happened in 2014. This conclusion is based on raw comparisons of aggregated sales over time, that do not take into account factors that change with time and influence purchases or consumption of these beverages independently of the tax. In this note, we show how the trend of sugar sweetened beverages sales would have been if the tax had not been implemented and how this compares with post-tax sales.

According to data from the Monthly Surveys of the Manufacturing Industry, in Mexico the average monthly sales of sugar-sweetened beverages (cola, flavored sodas and sport drinks) were 13.6 liters per capita between January 2007 and June 2016.(1)

The graph below shows the monthly per-capita sales trend from January 2007 to June 2016 (black line). Between 2007 and 2010, there is a relatively stable level of per-capita sales. From 2010, sales began to grow steadily until 2013. Since then, we see an even larger reduction since 2014, when the 1 peso per liter tax to SSB was implemented (vertical green line).

The graph also shows two scenarios resulting from a statistical model. The first one shows that in absence of the tax, per-capita sales would have continued growing as in the pre-tax period (red line). The blue line represents the predicted trend from the model in the post-tax period. According to this model, sugar-sweetened beverage sales were smaller compared to what was expected in the absence of the tax (there was a reduction of 6% in sales of these beverages in 2014, 8% in 2015 and 11.1% in the first semester of 2016), comparing with the pre-tax period.

In conclusion, the implementation of the tax was associated with a reduction in per-capita sales of sugar-sweetened beverages in Mexico. 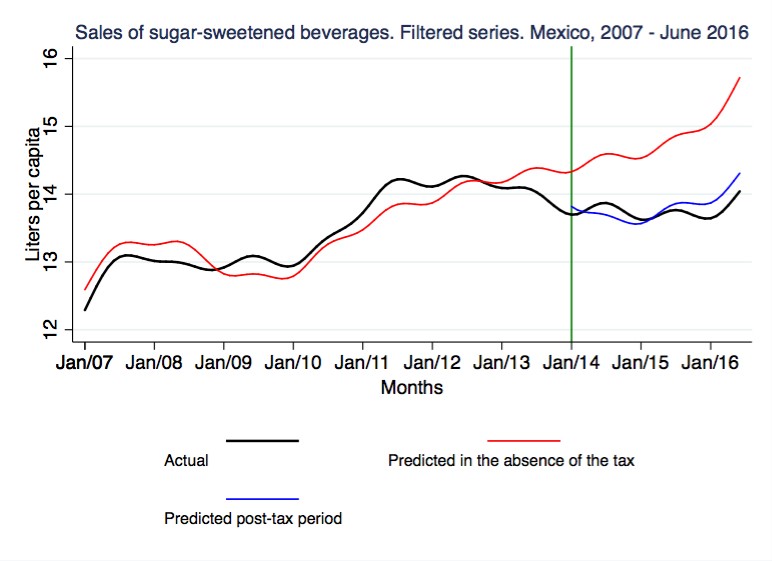